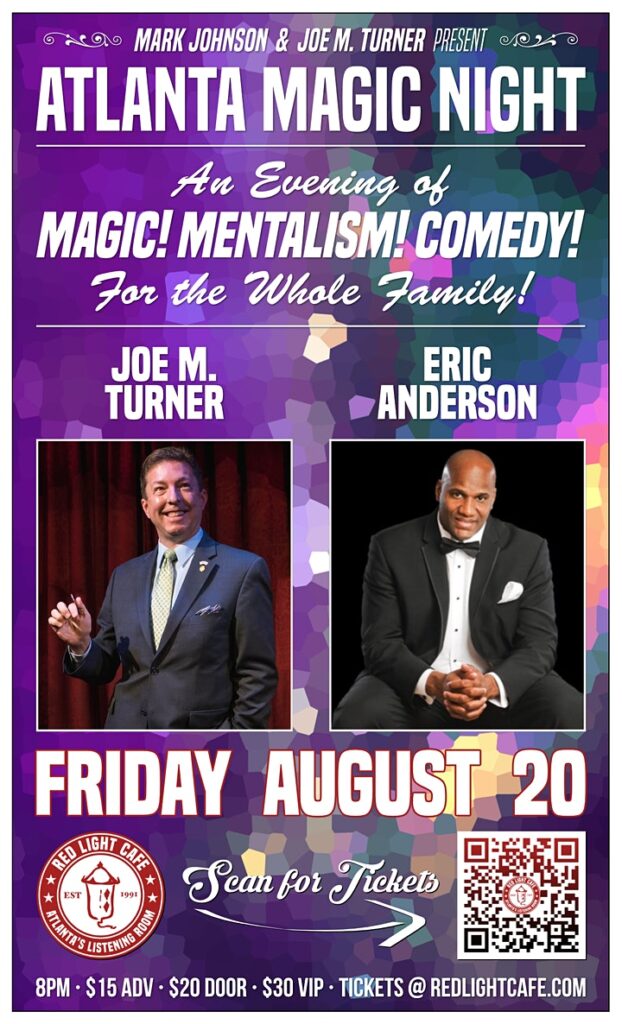 Just a quick note to share some good news. The show that Mark Johnson and I have co-produced since May 2014, Atlanta Magic Night, is proud to announce that Eric Anderson will be joining us for the August performance! I’ve been a fan of Eric’s work since I moved to Atlanta in the early 1990s. […]

12 Amazing Audience Engagement Ideas I Learned on a Cruise – Part 3   We’ve reached the conclusion of this short series – better late than never! Though the cruise itself is long past, the memories and lessons learned in each port remain. Out of curiosity – are you paying attention to the experiences you […]

Atlanta Magician Turner to Perform on 2015 K-LOVE Cruise Happy New Year, everyone! 2015 is already shaping up to be an amazing adventure – let me give you a quick rundown of a few things coming up soon. It’s cold in Atlanta, but this morning I’m sitting at the airport headed south for a few […]

12 Amazing Audience Engagement Ideas I Learned on a Cruise – Part 1 I recently returned from performing magic on a couple of European cruises which combined to fill nearly the entire month of August. My wife joined me on this adventure as the dates overlapped our 19th wedding anniversary. We started with five days […]

The Gratis Factor: 5 Tips for Convincing Speakers or Entertainers to Donate or Discount Fees (Note: The original version of this article appeared in February 2011.) Last week I had the opportunity to be part of a wonderful tradition here in Atlanta. Bert Weiss, host of Q100’s “The Bert Show,” created a foundation (along with […]

Atlanta Magician and Speaker Joe M. Turner on Performance Team Named by USA TODAY as “Best in Cruise Entertainment” Remember that cruise I performed on in June as a member of the “Magic Castle at Sea” program on Crystal Cruises? If you’ve followed my Twitter, Facebook, or Google+ pages, you saw some photos from my […]

An Amazing Event for Yelp.com

Buy Latisse (Bimatoprost) online at the guaranteed lowest price https://hello-eyelashes.com. Generic Latisse (also known as Bimatoprost) is an eye drop that is used for the purpose of growing longer and thicker eye lashes. It also helps in combating the issue of glaucoma that can lead to impairment of vision if it is not treated on […]