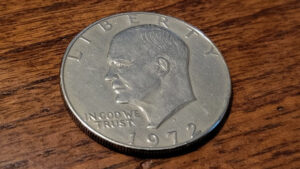 While working a trade show booth recently I found myself in a short lull — that time when there’s a big assembly of some kind and the traffic in the room is diminished. I was standing at the corner of the booth rolling a worn 1972 Eisenhower silver dollar across my fingers, biding my time and looking around for an attendee I could engage.

Something distracted me; I don’t know what. Maybe my hip touched the edge of the display table full of brochures, candy, and tchotchkes. Maybe I saw movement at another booth in my peripheral vision. For whatever reason, I zoned out and the coin slipped. I felt it hit the back of my arm and I believed, in my sudden burst of adrenaline, that I had caught the almost-dropped coin against my body with my arm before it hit the ground.

I slowly pulled my arm away from my body and… nothing. I didn’t feel or hear anything fall, or drop, or hit the carpet. At this point I thought the coin must have eluded me after all and had rolled away.

I looked around the floor for a few minutes. Nothing. The assembly let out and the trade show crowd built up again for the end of the day rush. I reached into my bag, grabbed another Eisenhower, and chalked this up as a loss as I went back to performing.

After everyone had left the booth that evening, I took my time packing up. I looked under the tables and the boxes stored underneath. I looked carefully around the booth, the nearby walkways, and other possible hiding areas. That coin was either buried underneath a box I wasn’t going to move, or had rolled into another booth that I wasn’t going to enter, or it had been kicked somewhere else, or it had already been found by someone else.

The next morning I arrived early and couldn’t help looking around some more. Still nothing. Oh well, it’s just a dollar, and not a particularly collectible coin. I’ve lost more than that by picking the wrong gas station for a fill-up and passing a cheaper one five minutes afterward. Plus, I’ve surely got a dozen more of those coins in my basement. I let it go and had a great trade show.

Yesterday I got home and unpacked. As I was preparing to take clothes to the cleaners today, I checked all my pockets.
In the sport jacket I had worn on the day I lost the coin, in the inside lower ticket pocket, beneath the inner left jacket pocket, was that Eisenhower silver dollar. Somehow it must have hit my shirt and been caught in a position that, when I released my arm, allowed it to fall at some angle that landed it safely in the most unlikely of places.

I don’t know if there’s a moral to the story. It was just a pretty #amazing moment to find that coin this morning and realize that I had fooled myself with the best trick of the whole gig!