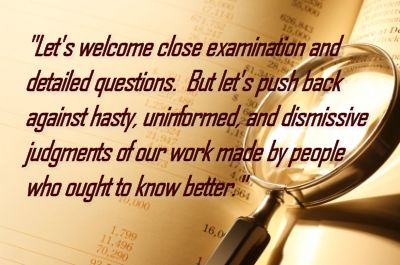 Recently I heard a local radio personality – a man with whom I usually agree – engage in such intense scrutiny of a news story that his objectivity audibly turned into prejudice. He discussed wasteful, extravagant government spending and pointed to numerous government conferences as the source of some of his disgust. Frankly, I was with him up to that point.

But then he and a reporter went down a cherry-picked list of expenditures, giving short descriptions of conference sessions and the price tags associated with them. “Four 90-minute sessions on crisis leadership” – followed by a fee. Some other sessions with more creative, even fun titles were subsequently laughed “at,” not laughed “with.” Neither man managed to ask what is obviously the critical question: Was the value of the session worth the cost?

Don’t Judge a Fee by Its Label

A number in the tens of thousands for a handful of breakout sessions at a conference may sound like a lot of money for a few hours in a training room, but the broadcast mock-fest completely ignored the amount of preparation and expertise that goes into creating, developing, researching, and preparing solid content and skilled delivery. There is a lot of time, effort, education, expertise, and experience that goes into that number… hours, months, and years that far surpass the mere minutes on-the-ground in that training room, on the platform, or on the stage.

Without any facts to the contrary, I wouldn’t begin to dispute the work value of any of those callers, or the value of that host as a radio host or as a CEO. In fact, I am a supporter of free market, no-limits salaries for a corporate leader or anyone else who has great vision, great skills, and who brings great results. And no matter who is paying for that value, if the value is earned then it shouldn’t be mocked. If the value isn’t earned, it should be stopped. But the transaction should not be prejudged and ridiculed without even attempting to understand the value exchanged. That is absurd.
[pullquote]”A transaction should not be prejudged and ridiculed without even attempting to understand the value exchanged.”[/pullquote]
This radio host – and others belittling the value of live speakers and trainers at live conferences – should pause and give those professionals the opportunity to make the same case they would make if their own compensation were put under a microscope for the world to see. Are you worth your keep? Frankly, we speakers and entertainers ARE worth it, or at least some of us are. We certainly ought to be evaluated and held to high standards, but our value should not be dismissed or mocked because of a creative session or program title in a 24-character field on a spreadsheet somewhere.

High Fees for High Value are not Wasteful

Let’s be clear. Nobody thinks excessive or wasteful spending is a good idea, particularly when you are dealing with public funds. There should rightly be a higher standard when the taxpayers’ money is being spent, and those expenses should never, ever be treated lightly or frivolously. (In all candor, it’s an unfortunate double standard that the intense scrutiny used to evaluate spending of thousands or tens-of-thousands in these cases is not applied to the spending of billions and hundreds-of-billions in other cases, but that is a discussion for another place.)

So let’s accept the shared understanding that wasteful spending is bad. With that as a starting point, I offer this challenge to my colleagues and peers:

Whether paid with private or public funds, a truly high value merits a high fee. Will there be arguments or debates about the value? Sure. But let’s not start with the assumption that any entrepreneur who comes up with an engaging title or structure for his or her presentation is automatically suspect simply because there were four, five, or six digits on the check they received. You cannot fairly label that fee as unreasonable unless you have given their content a fair evaluation, and that didn’t happen in 5 minutes on a radio show.

Speakers and entertainers, are you prepared to justify your value? Planners, are you organizing your conference so that you are ready for scrutiny? Let’s welcome close examination and detailed questions. But let’s push back against hasty, uninformed, and dismissive judgments of our work made by people who ought to know better.