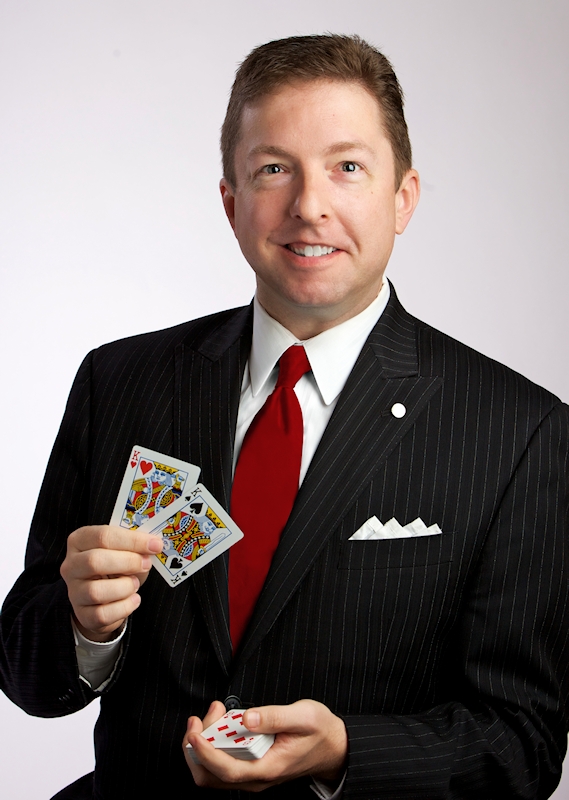 Joe M. Turner is a professional speaker, mentalist, and magician based in Atlanta, Georgia. A brand engagement and audience impact specialist, he creates customized corporate magic presentations and keynotes for promotional, motivational, and entertainment events in the United States and around the world.

Joe's title, "Chief Impossibility Officer," alludes to his corporate background prior to his magical entertainment and speaking career, as well as his expertise in adapting his performances to entertain and amaze his audiences while emphasizing specific marketing or inspirational messages.

Because of his work as a magic consultant, writer and director for theatre, film and cause-related promotional projects on the national scale, Joe is sometimes called "America's Corporate Conjuror." He has entertained prominent elected officials, sports figures, corporate leaders and other celebrities. He has been featured in numerous television, radio and print appearances, including Good Morning America, Nightline, and a highly rated feature on CNN Headline News.

Joe served as the 2015-2016 International President of the International Brotherhood of Magicians, the largest association in the magic industry with approximately 10,000 members in 88 countries. He is a Life Member of the IBM. He is also a member of the National Speakers Association, the Academy of Magical Arts at The Magic Castle in Hollywood, the Society of American Magicians (Life Member), The Magic Circle in London (A.I.M.C. with Silver Star), and the Fellowship of Christian Magicians. He is also a popular speaker, onscreen and onstage talent, a professional pianist, an accomplished vocalist, composer and playwright. He and his wife have one daughter and one son.

(Note: If needed, a full biography is available on Joe's Wikipedia page. Please do not use bios for introducing Joe at events; see the Planner Resources page for introductions.)

Joe was the first Georgia magician and first Mississippian to perform in all three showrooms at The Magic Castle in Hollywood, California:

Only a few elite performers have ever attained this "triple crown" honor. This distinctive mark of excellence and versatility means that Joe delivers the highest professional performance standards in a variety of venues, adapting to his clients' specific event needs without compromising excellence in performance.

Atlanta magicians and performers around the world consistently recognize Joe with awards for his exceptional technical and artistic skill.

Joe received unanimous election to The Magic Circle in London, with the unusual distinction of immediate advancement to the degree of Associate of the Inner Magic Circle (A.I.M.C.) with silver star.

Joe is featured extensively in this segment on Public Broadcasting Atlanta's "This Is Atlanta." Enjoy!