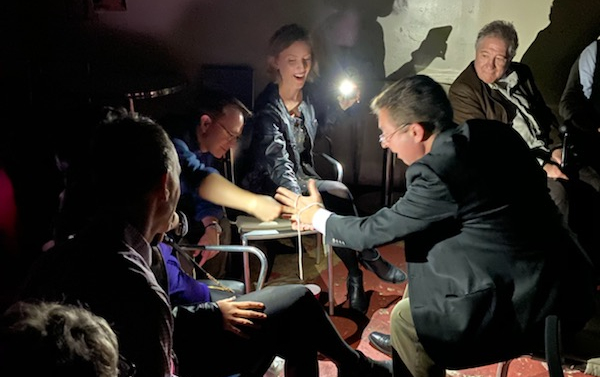 For the last five and a half years I’ve been a producer of Atlanta Magic Night, a monthly magic, mentalism, and comedy show with a rotating cast of local and national performers. I get to perform and MC the show sometimes, but I am also one of the “on call” people if a booked performer has a problem. As it turned out, one of the performers booked for our January show contacted me to let me know he had been diagnosed with shingles. That meant that I was suddenly on the bill for Saturday, January 11.

We had a pretty good pre-sale even though the weather was gloomy, so off I went to our venue partner, Atlanta’s venerable Red Light Cafe. The sky grew progressively darker as I drove there, loaded in, preset props, and did my sound check. Sure, a little rain, but everything was going just fine… until a loud crack of thunder introduced a torrential downpour. The flooded parking lot suddenly looked like a theme park flume ride.

Despite the increasingly scary weather, we opened the house as people were arriving anyway, bringing news of traffic and power outages and other fun things. No worries, we had power and music and lights and food.

Then, maybe 20 minutes before showtime, the entire complex went dark.

Rather than panic, I went to the piano and started playing so that there was background music. I took some requests from people in the dark house. I continued to improvise and play and chat.

A little after 8:00 PM, the manager asked me what we wanted to do. I suggested we give it another 30 minutes, and he agreed.

I explained the situation to the people that were there. Then I also explained that rather than have them leave with no show, that we would try something unusual so even if they didn’t get a full program, they would get a really neat story to tell.

We rearranged the chairs and tables to create a small performing space on the floor. People took out their phones and turned on their flashlights. And there, in a dark club, with multiple LED spotlights, I performed a close-up magic show that nobody there will ever forget. I know I won’t.

One of the club’s owners is also a tech for the Atlanta Opera. She has seen hundreds of performers, performances, technical glitches, entertainers, bands, and live theatre situations. Her comment on the night?

“I have no idea how you pulled that together — entertaining those people during a power outage. You pulled it off, and I’m impressed. Seriously, one of the finer things I’ve witnessed. You’re on the list!”

Our emcee for the evening was a local attorney who does magic on the side. When he sent the photo you see here, he also shared a comment that was inspirational to me: “This was beautiful. This is what magic is about. You are a riveting performer Joe, and a connector of thoughts and people.” (Thank you, Chris!)

Sometimes “stuff” happens. You either can let an unpleasant, complicated, challenging situation stop you cold, or you can let it push you to create an #amazing experience for your audience even in the midst of the storm.

And that’s something useful that we can learn from the magical night the lights went out in Georgia.

Epilogue
We sent everyone home. I packed everything away by flashlight. As I packed the last item into my case, the power came back on.

Some things are simply meant to be.