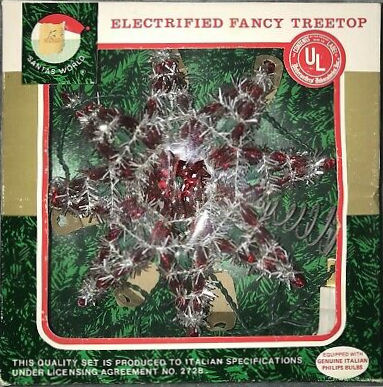 You might think a performer’s most treasured Christmas memories would revolve around aspects of the season related to his art. As a magician, writing about “the magic of Christmas” would not only be consistent with my brand, but also probably good fodder for a moderately shareable video.

As a musician, I could spend pages writing about favorite songs and carols that cozily curl up in my ear, mind, and heart each December, or maybe I could even churn out a few chords and rhymes about reindeer and ribbons or angels and kings.

Instead, my most iconic Christmas memory is an experience that happened when I was about five years old, and which might have lasted all of fifteen seconds.

In the early 1970’s my family lived in a small house on a corner lot in a modest neighborhood in Jackson, Mississippi. Christmas there was rarely as snowy or picturesque as the images on Christmas cards, but my folks still committed to the traditions: food, music, and of course decorations both inside and out. Primary among the decorations was, as you’d expect, the tree.

Though it is anathema to many, we were an artificial tree family. Mom and Dad liked the economics of re-using the tree year after year. I remember that old plastic pine, with wire branches that were taken from the box to be unbent and reshaped before being inserted into the pre-drilled pseudo-trunk. It was placed in the corner of the family room, to the side of the television where it would be laden with lights and ornaments and other decorations.

Among those other decorations was the gaudiest tree-topping star you have ever seen. It was a hard plastic frame embedded with silver tinsel and multi-colored lights. A spring-shaped attachment at the base allowed it to slide onto the top of whatever object was destined to be its pedestal.

This star was no mere ornament. It was a technological testament to the electric, blinking, polychromatic glory of post-moonshot America. I loved that star. It transfixed me.

Daddy took the star out of the cardboard box and handed it to me. I held it like it was a treasure from heaven. Then he knelt down, picked me up in his arms, sat me on his shoulder and told me to put it on top of the tree.

I remember the world was a blur as he stood and hoisted me into the air. I remember straining to reach over to the tree. I struggled to get the metal spring over the top, making sure it was straight and wouldn’t fall off. I couldn’t believe I was up there, so high up, looking over the sofa and the room from such an altitude, even higher than Daddy’s head. The ceiling was there and I could practically touch it. The ceiling!

A moment later, Daddy set me down again and we moved on with the decorating. My head swam as I adjusted to life on the ground. It was quite a rush for a five year old.

Every year after that, I wanted Daddy to hold me up and let me put the star on top again. Sometimes my brother did it, but it was usually my thing. I wanted to do it because I wanted to recapture the emotion of those few seconds that I still recall. It was always great, but never quite the same.

A fleeting moment when Daddy knelt down to lift me up higher than I’d ever been, punctuated with a star. That’s what I think about at Christmas.