The 2018 Winter Olympics concluded just as my wife and I were leaving for an overseas trip. Thanks to YouTube TV, we have a recording of the closing ceremonies that we can enjoy when we get home.

When the Winter Olympics were finished the media buzz immediately went on to the Oscars, but I continued to think about two moments that I thought were noteworthy. Today I’m on a cruise ship in Fiji, but here are a couple of lessons we can take away from PyeongChang. 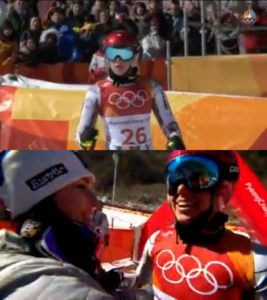 Few things are as genuinely endearing as sincere humility, or as inspiring as good sportsmanship.

The unexpected win by Czech skier Ester Ledecka in the Super-G was a shock not only to her, but also to the woman she beat out for the gold medal, Austria’s Anna Veith. The presumptive winner was already practically celebrating, being congratulated by friends, and simply waiting for what everyone knew was a fait accompli.

Except that it wasn’t.

Ledecka had never finished higher than 19th in a World Cup race in this sport, but she had the race of her life to win Olympic gold. She couldn’t even believe it herself when she learned the result. She was there to do her best, without an expectation of a medal at all. And her reaction touched everyone.

Now silver medalist Veith was obviously surprised and disappointed, but still congratulated her fellow athlete with a smile and a hug. Contrast this with other personalities at the Olympics whose moments of disappointment included one athlete removing a silver medal from around her own neck, or another tweeting thinly-veiled race-baiting following an impartial tie-breaking process he was fine with until he lost.

Which actions demonstrate maturity, sportsmanship, and championship character in the face of crisis and disappointment? Which do you want for yourself and your brand?

Ingenuity, determination, and persistence can overcome systemic obstacles or expectations. 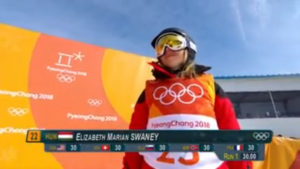 Elizabeth Swaney received both accolades and jeers for her path to PyeongChang, but she’s now an Olympian.

Elizabeth Swaney may not go down in sports history as a champion skier but she accomplished something that many dream of but never do anything about: she became an Olympic athlete.

The halfpipe skier made it to the Olympics by analyzing the qualification rules. She trained to ski a basic, non-trick routine well enough to do it consistently without falling and took that fundamental routine to enough qualifying events to meet the point and placement requirements. Without tricks, her skills would always land her in last place. On occasion, others would fall and she would finish a couple of spots above last place. In all cases, she always finished in the required placement, often because there were not enough participants.

She then found a country where she had a legitimate claim for being considered for the team and who had no athletes vying for the spot. She found that match in Hungary, her grandparents’ home and a nation with no female halfpipe skiers. Result? She is now and forever an Olympian.

Many criticized Swaney online, saying that she “scammed” the system or was an “imposter.” I take a more positive view.

This woman saw an opportunity, found a way to follow the rules, and lived out an amazing dream. Her run on the halfpipe was simple in comparison to the trick-filled routines of the others, but I suspect few average Twitter haters could remain standing throughout even her basic run. She treated the process and the sport with respect, trained, dedicated personal time and resources to qualifying,did her best in the contests she entered, and found a way to fulfill a dream that millions of others have stood by and talked about but never bothered to pursue.

The expectations of others didn’t stop her. Assumptions about what it takes to go to the Olympics didn’t stop her. The qualifying rules, which would look intimidating to any person simply reading them for the first time, didn’t stop her from doing the research to see that there was an opening.

She developed basic skills and applied ingenuity and intelligence to make the most out of what she had. I could certainly benefit from applying similar virtues of creativity, ingenuity, and unconventional thinking to my own business.