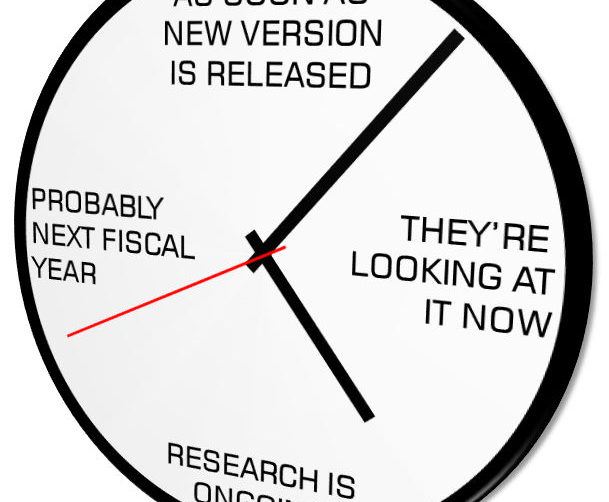 Let’s face it. Even the least change-averse person among us still has a resistance to change. Even the change champion feels hesitation. Sometimes we find ways to disguise our resistance and delay action even when we want to move forward.

When will it be time to take action?

Last week I answered an online question from a fellow magician in a private forum. His question related to a technique that is used in card magic, a genre of the art which I have studied for almost my entire magical life. It is a technique that requires not only a significant investment of time and effort to learn, but also consistent, ongoing practice to maintain. It’s not a trivial skill to develop, and multiple versions of the technique have been developed. In the last 30 years or so it has truly caught fire within the industry and new developments on the principle are being released constantly.

As a result, there is an ongoing tension about which approach to the principle is “best.” There are two primary approaches that have the lion’s share of the market. A new entry within the last few years is gaining traction. And there are a dozen other players each of which has vocal advocates. The debate about which is “best” comes up often, attracting comments from long-term adherents to recent adopters to new converts.

My answer to the “which approach is best” question was to investigate the options, decide which approach had features that best suited his style, and to remember that whichever option he chose, the vast majority of experiences he could create using that technique were actually achievable using all of the available approaches. From the audience’s perspective, relatively few things were completely dependent on this choice. It was mostly a matter of what fit his own preferences and got him to take action. The technique is a tool, and there is much less profit in constantly agonizing over the debate than in making an informed decision and moving forward with implementing it.

Unfortunately, many magicians spend so much waiting, second-guessing, and debating the merits of the approaches that they miss out on literally years of performance time when they could have been amazing audiences and learning performance lessons that they could apply to the work even if they ultimately changed their preferred approach later.

In the true story above, you could probably replace magic with almost any industry, and the specific technique in question with almost any decision that people have to make about tools and methods.

In any change management situation, it is obviously important to do due diligence, do the research, and compare what you learn to what your specific needs and preferences are.

Beware the inertia of the debate, the questioning, the “what if”-ing. There is a comfort in knowing that your delay in taking on the actual work is reasonably covered by the excuse of continuing your research.

In change management, as in magic, things are not always quite what they seem. Change advocates and leaders can still be privately afraid of actually moving forward. An endless review loop is a good way to feel like you’re leading change even while you’re stalling!

Are you stalling with a research excuse? Your audience is waiting.