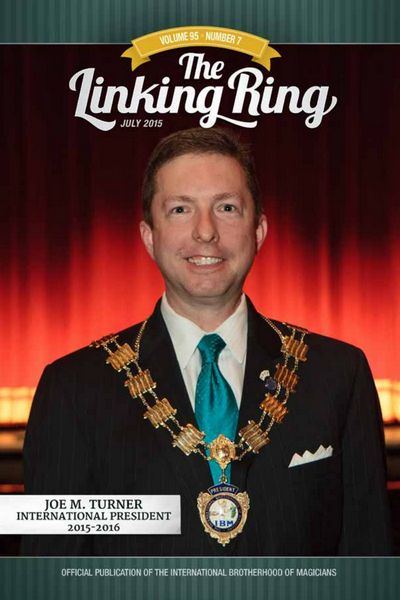 Atlanta magician and speaker Joe M. Turner is installed as International President of the International Brotherhood of Magicians.

Atlanta magician, mentalist, and speaker Joe M. Turner has been installed as the new International President of the International Brotherhood of Magicians (IBM). The IBM, with 10,000 members in 88 countries, is the largest association in the magic and illusion industry, with members ranging from casual hobbyists to special effects consultants, performing art historians, and professional performers. (www.magician.org)

The installation occurred today, July 16, 2015, at the organization’s annual business meeting held in conjunction with their annual convention. This year’s convention, the 87th annual conference, is being held in Jacksonville, Florida. Turner appeared on local radio and television stations earlier this week promoting the convention, the public shows being held at the Florida Theatre, and the art of magic in general.

Turner, a former management consultant, is a full-time speaker and corporate entertainer based in Atlanta. He is also a member of the Academy of Magical Arts at the Hollywood Magic Castle, the Magic Circle in London, the Society of American Magicians, and the Fellowship of Christian Magicians. He has written for Genii Magazine, the industry’s oldest journal, for the past fifteen years. He has performed at the Hollywood Magic Castle, Monday Night Magic in New York, the London Palladium, and at hundreds of corporate meetings and events in North America and Europe.

Joe and his wife Rosemary have two children (Hayley and Preston) and live in the northwestern suburbs of Atlanta, Georgia. You can find out more about Joe and his work at www.turnermagic.com