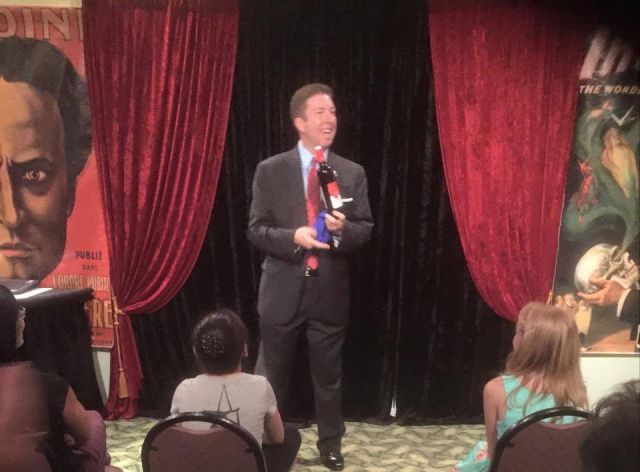 This week brought a return to sunny Florida and the lovely Wizardz Magic Theatre in Kissimmee, Florida. Wizardz Magic Theater at Seralago Hotel & Suites has been presenting weekly magic from a parade of outstanding performers since August 2009. This marks the third time I’ve performed here and the first time I’ve headlined.

There’s more to Wizardz than just the shows, though. Erick and Kim Olson have built this enterprise into a community that attracts both a flow of tourists and a steady cadre of magicians and local magic enthusiasts. At any given show you’ll find an audience filled with people who have never experienced live magic along with plenty of experienced magicians who are eager to see and support live magic performances in the Orlando area.

Part of the fun of performing is the fellowship and camaraderie with this community. It’s always a pleasure, for example, to spend some time talking with Mary Naylor Kodell, the widow of the great stage magician Jack Kodell but also a performer in her own right. Mary was an actress in London’s West End (from the age of 12!) as well as in film and television prior to 1962, when she and Jack retired in Orlando. (You can find out more about Mary in this 2-minute video, hosted by none other than David Copperfield.)

At this particular performance, the opening act of the evening was another young lady with stellar performance skills and a magical legacy. Lydia Coomes, age ten, started the evening off with a fantastic close-up act including magic with cards, coins, and even a dice-stacking demonstration! The granddaughter of magical innovator Bob Swadling certainly has a bright future in magic should she choose to pursue this branch of the performing arts.

Wizardz Magic Theater was also the site of the IBM JAM in January of this year. The JAM is a members-only day of magic and learning for members of the International Brotherhood of Magicians. I admire the Olsons for their commitment to elevate both the performance and the perception of the art of magic in their community, as well as for the benefit of the IBM. They were willing to stretch past their normal processes in order to help their association be more successful. You can expect elevating performance and perception to be key themes for me as I assume the presidency of the International Brotherhood of Magicians next month.

In the meantime – are you looking for ways that you can stretch and benefit your own field and your own associations? It usually takes going beyond what you’re used to doing to get different and better results!