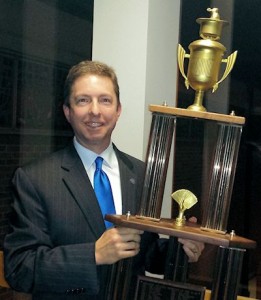 PRLog (Press Release) – Jan. 24, 2014 – ATLANTA — Atlanta speaker, mentalist, and magician Joe M. Turner has been named 2013 Greater Atlanta Magician of the Year by the combined memberships of the Atlanta chapters of the International Brotherhood of Magicians (Ring 9) and the Society of American Magicians (Assembly 30). The award, announced at the groups’ combined awards banquet on January 18, marks the third time Turner has been voted the honor by his industry peers.

Turner currently serves as International Vice President of the International Brotherhood of Magicians and has served twice as president of his local chapter. He is also a member of the Society of American Magicians, the Magic Circle (London, England), the Academy of Magical Arts at the Magic Castle (Hollywood, CA), and the Fellowship of Christian Magicians, as well as the National Speakers Association and several other business and marketing associations. He has won numerous other awards, including Atlanta’s top performance awards in both close-up magic and stage magic. He was named “Best of Atlanta” for Corporate Entertainment in 2012 and 2013.

Turner is a popular keynote speaker who uses magic and mentalism to share marketing, branding, and motivational messages at meetings and conferences worldwide. His book High JOEltage! encapsulates some of his work on being a high-performing individual. His signature keynote, “5 Kinds of Amazing,” uses magic to illustrate how brands can create amazing experiences for their audiences. He is in high demand as an entertainer, appearing regularly at the Magic Castle, on Crystal Cruises, and at hundreds of corporate events each year both across America and internationally.

The Greater Atlanta Magician of the Year award has been presented annually since 1971 to recognize performance excellence, organizational service, artistic contribution, and charitable activities. The honor is symbolized by the Duke Stern Memorial Trophy, named after a popular vaudeville magician who eventually settled in Atlanta. The trophy, engraved with the names of all prior winners, is held by the current honoree for a year and is then passed to the next winner.