The fifth of the Five Kinds of Amazing relates to another branch of mentalism effects which I’ll group under the umbrella term “hypersight.” This category is distinct from the prior one in that while it includes apparent psychic abilities, this specific type of inexplicable knowledge is not derived from mind-to-mind telepathy, but rather from apparent knowledge at a distance without a direct telepathic connection to another mind. 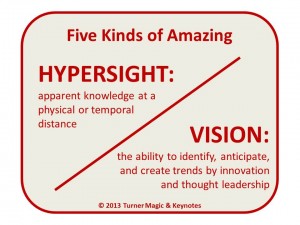 What kinds of effects or experiences might be included in this genre? In my own performances, I sometimes call out the serial number of a bank note volunteered from someone’s wallet or purse. This is information that wouldn’t exist in anyone’s mind, waiting to be telepathically read. The information simply exists in the environment and must be sensed through some kind of unusual remote vision. Likewise, a performer who can somehow tell you what items are in your purse, briefcase, or glove compartment would be demonstrating this kind of effect.

Examples outside show business might include the “psychic detective” who somehow knows where the body is buried or where some other lost item can be recovered. (I don’t personally believe in the real-world validity of such examples, but they are common enough stories in the popular culture that they serve as a clarifying example.) There are even tales of Cold War experiments in which the concept of remote viewing was explored for the purposes of espionage.

I also include in this category any apparent knowledge at a temporal distance – that is, the apparent ability to see into the future. As an example, I have frequently predicted (in the theatrical sense) local newspaper headlines or sports scores that would be reported on the day of my performances.

Outside show business, figures such as Sylvia Browne, Jeane Dixon, Uri Geller, doomsday cult leaders and others have taken the prediction game to an extreme, leaving the theatrical framework aside to attempt to convince gullible or heartsick people that they really could see into the future. As a result, these and thousands if not millions of other unethical individuals have made livings and sometimes fortunes by monetizing the misplaced hope of others.

It goes without saying that any skill – theatrical, technological, or otherwise – can be used for purposes either good or ill. The underlying concept of precognition or second sight, though, is a truly compelling theatrical idea. It is a startling and amazing thing to think that someone could know in advance the outcome of a crisis, challenge, contest, or any other question or endeavor.

So what business competency can we develop that gives our audience this kind of experience, in a positive, inspirational, and ethical way? 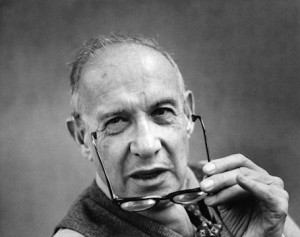 “The best way to predict the future is to create it.” – Peter F. Drucker

To answer that, I go back to management consultant Peter F. Drucker’s well-known turn of phrase, “The best way to predict the future is to create it.” While perhaps a bit clichéd now, this is an empowering and illuminating idea in several ways, all of which revolve around the concept of vision.

First, the direction to create the future assumes a fundamental ability to create. Creativity is an invaluable asset and, while some may demonstrate it in higher degree than others, everyone has the ability to increase and improve their creative output. Once a new product, service, technique, or idea becomes accepted and embedded in the environment, the person, group, or brand that put it there will retroactively be credited with uncanny vision of the future.

Second, creating the future assumes a clear goal. Does your brand define clear goals and make it clear that they have been achieved? The pattern of declaration, achievement, and celebration is convincing evidence that there is an evolving but clearly intentional vision for the future of the brand and its relationship to its audience.

Third, creating the future hinges on the ability of a leader to inspire action. Whether dealing with a large organization, a small team, or even oneself, the most innovative creativity and the clearest vision are of no use until action is taken.

Vision, as a corresponding competency to hypersight, relates to the ability to identify, anticipate, and create trends by innovation and thought leadership. Creativity, clarity, and leadership are the tools that allow you to amaze your audience in this mode.