An Amazing Event for Yelp.com 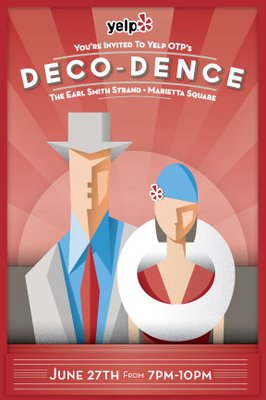 Last month I was honored to perform for staff and users of Yelp.com in their first OTP (“Outside the Perimeter”) community event in metro-Atlanta. While the Atlanta Yelpers have had their own events, this was the first for the OTP community. The “Yelp OTP Deco-Dence Party” was a celebration of food, merriment, and 1930s & 40s style. I performed mobile close-up magic as well as serving as the closing act onstage.

The event, as evidenced by the multiple reviews that have appeared online since then, was an unqualified success. In fact, you might even say it was an amazing event. But what made it amazing? Using my “Five Kinds of Amazing” model, let’s take a closer look.

I think this event primarily leveraged the strengths of two categories.

1. SCIENCE/PROCESS: Relating to the unexpected result of a natural law or process; an unexpected moment of delight in an otherwise familiar process or environment.

The event was held at the Earl Smith Strand Theatre, a beautiful space where I’ve had the good fortune to perform on a few previous occasions. This venue has an intriguing history and is a good example of a rescued gem. Like Atlanta’s Fabulous Fox and other theatres large and small, this former movie house stood vacant and deteriorating until the community saved it.

This location wasn’t new, and the renovations weren’t even all that recent. Many people were aware of it and even drive past it on a regular basis, but had never been inside. This is an example of something being hidden in plain sight. Yelp OTP amazed their audience by spotlighting the extraordinary hidden inside the ordinary.

2. CONTACT/COMMUNICATION: Relating to apparent mental interaction or influence; the efficient, effective, and excited sharing of information between people.

Yelp, as they describe themselves, “is an online urban city guide that helps people find cool places to eat, shop, drink, relax and play, based on the informed opinions of a vibrant and active community of locals in the know.” It’s largely a review site, but the people who run and participate there (“Yelpers”) have a sense of community and connection that goes beyond other online review sites. As a result, they are prone to have parties.

The Yelp audience is inter-connected both online and in real life, and Yelp uses that blend of communication to create demand, share information, and to prolong the effectiveness of the event after it was concluded. Before the event, RSVPs are flying in, along with comments about what is coming and who will be there. At the event, people are checking in, posting pictures, and connecting with new people. Professional photos are posted after the event, bringing everyone back to continue the conversation and share reviews. All of this communication pays big dividends in making the event take up more valuable real estate in the minds of their audience. Amazing!

As for me, the event was a great opportunity to work in a beautiful setting here in my own part of town. I got to meet a lot of fun people, including the organizer Heidi P. She put together an outstanding event and I hope I get to work with her and the Yelp folks again soon. 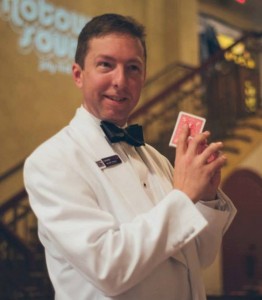 P.S. I have to share my favorite review – thanks to Lindy F. for your kind words!

The most fun of the night had to be the entertainment. While I enjoyed the stage performance of the riotous Thimblerig Circus and the vocal stylings of Amy Baldwin in the lounge, my favorite and most entertaining of the night was Joe M. Turner, magician extraordinaire.

I loved his stage performance, but found myself in his presence around the theatre all night being wowed by his masterful prestidigitation. Card tricks, dice tricks, coin tricks, the man does it all. As my friend stated, so matter-of-factly – this man has to perform at my wedding. ‘Nuff said.

Again, this has been the most fun event to date for me.