We all have those streaks where our patience is tested. Challenge, inconvenience, and delay attack us from all sides. Some of these things are part of daily life – traffic, auto repairs, broken air conditioners. Others are part of our personal interests – after years of fruitless wandering, your team makes it to the championship game… and falls short of glory. (That one just happened for me last night and I’m getting over the sting today. But #hailstate anyway!)

While I’m still no expert on patience, I recently had an experience that gave me an opportunity to grow. Let me share it with you. 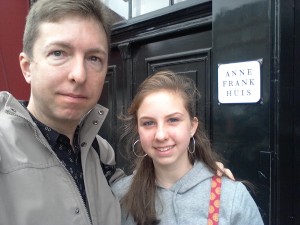 I had to compose myself after touring the Anne Frank House with my own 15-year-old daughter by my side.

Earlier this month I performed on a Crystal Cruise through Scandinavia. One of our ports was Amsterdam. My daughter and I had previously decided that the most important item on our to-do list in Amsterdam was to visit the house where Anne Frank and her family hid during WWII. We went ashore first thing that morning and practically ran to get in line before they opened. There was already a 45-minute wait, but while we waited the line doubled in length. (Fortunately, the Anne Frank Huis provides free wifi, a fantastic bit of customer service for travelers and tourists!)

While I had read the diary and seen the movies and was familiar with the entire story, I was not quite prepared for the emotions I felt as I went through the rooms in that house. After creeping through the secret passage behind the bookcase, we saw the rooms where she and seven others hid in their attempt to avoid being arrested by the Nazis. We wound our way through the bare rooms in a snaking line, looking at photographs of what the rooms looked like during the hiding.

As we made our way through the rooms, though, we came to a stop. Nothing sudden, nothing obvious… our progress just slowed and stopped. We stood there for a couple of minutes. Then three. Five. Seven.

After about ten minutes, people began to get visibly agitated. Not angry, but mildly annoyed. People were checking their watches, fidgeting with their phones, and starting to have quiet conversations in what had previously been a nearly silent room. While I had turned off the service to my phone, I did take it out to check the time, and I started to think about what we would do next.

Then I stopped. I stopped cold.

It occurred to me that we had been standing there for ten minutes, and we were already impatient to move out of that room… that room where eight people hid, at the risk of death, for over two years.

It seemed almost… profane. Of all the places in the world to allow oneself to get antsy after a ten-minute delay, this seemed perhaps the least appropriate. I was slightly ashamed of myself, and of all of the people in that line – speaking multiple languages, from multiple countries. Nothing disrespectful was said, or done, or intended, but I couldn’t help but notice the irony of what had happened in that moment even if no one else had. 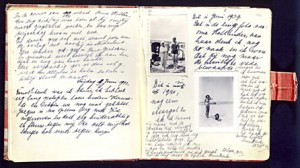 A couple of pages from Anne Frank’s diary.

After a few more minutes, the line continued to move and we proceeded out to the museum and saw photos, letters, and the main diary. There was video of Miep Gies and of Otto Frank himself. As he spoke of his daughters, I looked at the teenage girl beside me, a young woman who is now the same age as Anne Frank when she died in Bergen Belsen. I mourned with that man.

As I processed what had happened, I resolved to challenge myself to think about the virtue of patience. I am no shining example of patience, I assure you. (My daughter would agree – with examples from that same trip!) I would even go so far as to argue that impatience can be a virtue, in some contexts. But not in that room. Of all places, not there.

When you are feeling the stir of annoyance, frustration, and impatience, take a moment to look around you. Consider the context and the situation.

You will have an amazing impact on those you lead, those you follow, and everyone around you when you can provide the context that allows people to discover for themselves the virtue of patience.