I admit it. I’m rebellious, change-driven, and a radical non-conformist… in small doses.

Some people are bomb-dropping, mountain-moving, headline-making change agents. Whether in leadership roles or executing tasks, they are ready to rock, all the way, all the time. Fundamental transformation, baby – do it now! And when we’re done, let’s change it back so we can do it again. These people may be driven by a compelling personal vision for the future. Of course, they may also be easily influenced, distracted by shiny objects, or have chronic wanderlust. Either way, they have a very high tolerance for change.

Other people have a lower tolerance for change. Where others see stubborn ruts, they see clear, proven processes. Where others feel a prickly monotony, they feel a comforting security. Fools rush in, as the old song says, and the only thing these take-it-slow folks won’t hesitate to do is to remind you of it. Everything else can wait.

The fact is that all of us demonstrate elements of both of these broad stereotypes. But equally true is the fact that we all live and work in environments where the pace of change is constantly accelerating. Being adaptive and open to change is a personal and professional life skill.

In the 1987 movie The Princess Bride, the famous “battle of wits” scene between Vizzini and the Man in Black concludes with a bit of wisdom that change averse people – meaning “all human beings” – can learn from. Here, watch the scene so you have it fresh in your mind:

The Man in Black survives the battle because he “spent the last few years building up an immunity to iocane powder.” That’s interesting. He was prepared for a challenging situation because he had spent sometime building up his tolerance. When confronted with the danger, he could depend on being able to survive it.

Instead of dosing up on iocane powder, I’d challenge you to add something to your daily routine to help you build up your tolerance for change. It doesn’t have to be headline-making change. Just do something on a regular basis to take a different path and keep yourself accustomed to the unaccustomed. 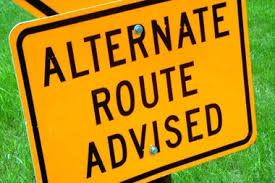 Build up a tolerance for change by doing some little things differently every day.

My favorite low-stress change is the alternate route. When I’m driving somewhere for a meeting or show, or driving home, I will often take a turn just for the novelty of taking a different route. I like the opportunity to see what’s going on in the places or along the streets where I travel less often. If my GPS happens to be on, I kind of like to see it recalculating routes based on the turns I make and the one’s I don’t. I guess I enjoy that little power rush of asserting a little human dominance over technology!

Another option you might consider: order something different on the menu at the restaurants where you eat often. Sure, you already know what you like. You can always order that again sometime. Next visit, though, try something you’ve never had.

Sign with a different colored pen, park at the other end of the parking lot, sit on the other side of the room at church – whatever you do, throw a little change of pace into your life. Build up that tolerance one random turn at a time!